SUPERVALU ON MISSION TO GET NI COOKING AGAIN

LEADING foodmarket convenience retailer, SuperValu is on a mission to get Northern Ireland cooking again, with the launch of its new £1M ‘Let’s Cook’ campaign. 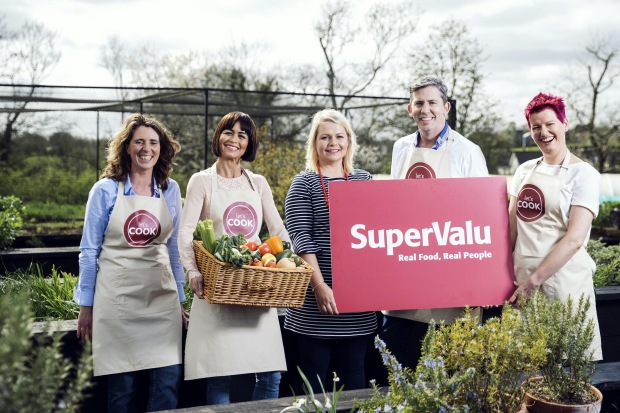 Announcing the major investment, SuperValu has released new research that shines a light on consumer cooking habits and attitudes to food in Northern Ireland.

According to the new report, only half of people (51%) are cooking at least one meal at home from scratch five times a week or more, with dinner the main driver. A worrying 18% say they cook no meals from scratch at all; whilst 13% cook one to two times per week and 17% three to four times.

We have a developing foodie culture, with over two thirds (68%) believing they have either very good or fairly good cooking skills, while 55% of the males surveyed and 79% of females ranked themselves at the ‘good’ end of the cooking skills scale.

In the contest for the coveted title of ‘national dish for Northern Ireland’, it’s almost neck and neck between Irish Stew (26%) and the Ulster Fry (24%).

Lack of time was cited as the largest barrier to cooking from scratch (34%), whilst 20% said they ‘couldn’t be bothered’ and 13% cited a lack of inspiration. There is also a desire for healthier inspiration, with 29% wanting inspiration for healthier lunches and 27% for the evening meal.

The new Let’s Cook campaign will encourage people to get back into the kitchen. Building on its work with leading NI chef, Noel McMeel (executive chef, Lough Erne Resort) over the last 12 months, SuperValu is bringing on board an expanded line-up of leading foodie ambassadors. Working alongside McMeel, they will provide much-needed inspiration to aspiring cooks.

Jilly Dougan, author of ‘Sow, Grow, Munch’ is SuperValu’s Innovation Ambassador. A passionate advocate of local produce, she will share her tips on growing your own herbs and veg, plus how to use home grown produce to add flavour and cook up simple dishes.

Sarah Patterson, owner of The Little Pink Kitchen and local food blogger completes the line-up as SuperValu’s Vegetarian Ambassador. Through sharing her favourite recipes, she hopes to inspire people to cook up tasty vegetarian cuisine that the whole family will love.

Commenting on the launch, SuperValu Lead Chef Ambassador Noel McMeel said: “Great home cooking has been at the heart of my ethos as a chef. With increasingly hectic lifestyles, consumers are crying out for inspiration. I’m excited to join forces with SuperValu and new Let’s Cook Ambassadors, Estelle, Jilly and Sarah to help put home cooking back on the menu in homes across Northern Ireland.”

The Let’s Cook campaign will be supported by a full suite of in store and online activity including; the development of a new interactive online hub; impactful POS and in-store displays; and a Let’s Cook roadshow that will visit several key high profile events throughout 2017.

Recipe videos, Twittter tastings and engaging social content will encourage consumers to get cooking and to share their experiences. In an exciting first for the SuperValu brand, an innovative ‘smelter’ bus shelter site on Foyle Street, Derry/Londonderry will create an immersive experience for commuters.

“As leaders in local, quality food, we are committed to helping our customers to lead healthier lifestyles, providing them with the support and tools they need to make small, positive changes.

“We are proud to unveil this leading line-up of ambassadors – with their help, we’re looking forward to helping Northern Ireland get cooking from scratch again.”