Hi allApologies for not blogging sooner, been real busy with wedding season, near finished!!! Loads to share will keep u all posted.
Firstly have been asked to share the press release below. It looks good so please support!!
“Food and literature combine for unique weekend celebration

A new food festival with a literary theme will take place this August Bank Holiday weekend, in a unique celebration of the life of one of Northern Ireland’s most acclaimed dramatists.

‘New Norths’ is a food festival with a difference, taking its influence from the cuisine of Ireland, Scandinavia and Russia, as well as the life and works of Brian Friel. Part of the wider Lughnasa International Friel Festival, it will take food out of the city’s cafés, kitchens and restaurants and into unique locations as diverse as the Titanic Slipways, the Giants Ring – and even one of Belfast’s Peace Walls.

Over the weekend of August 28-31, some of the city’s top chefs, baristas and bakers – including the award-winning Niall McKenna, Andy Rea from Mourne Seafood Bar, 2013 Great British Bake Off winner Stephen Chisholm, model and self-confessed “baking nerd” Jenny Curran and Danni Barry from Deane’s Eipic – will tantalize tastebuds with a wide variety of special events, from breakfast banquets to themed barbecues and pop-up restaurants in unusual locations.

Among the weekend’s highlights will be:

A ‘Big Dance’ at City Hall on the morning of Friday August 28, hosted by Mourne Seafood Bar and Oliver’s Coffee Bar;

An ‘Epic Nordic Breakfast and Ryanga Ritual Dawn Dance’ at the Giant’s Ring, hosted by Deane’s Eipic and Kaffe-O;

‘KiteTanica’ at the SS Nomadic, hosted by Cast & Crew;

‘Dancing On The River’, on the new Lagan footbridge, hosted by Holohan’s restaurant and Tony & Jen’s Café;

A ‘Tennessee Barbecue’ at the peace wall off Lanark Way, hosted by Bubbacue and Café Kreme;

A pop up coffee shop on the Titanic Slipways, hosted by Established Coffee and themed around Friel’s ‘Drowsy Maggie’s Waves of Tory’.

Local brewery Brewbot also will be popping up at all of the events, offering the festival goers the chance to sample some of their award-winning range of local beers and ciders.

In addition to taking inspiration from Friel’s works, ‘New Norths’ will link Belfast with Donegal and Moscow, as well as other locations across the 55th Parallel, such as Scandinavia and the Baltic States, home to some of Friel’s favourite writers, such as Chekhov, Strindberg, Turgenev and Ibsen. Special menus have been developed by all of the participating eateries, giving foodies the chance to sample delights such as apple and spelt porridge and the traditional Swedish Kalops stew, alongside local seafood.

The ‘New Norths’ food festival is organised by Belfast City Council and part-funded by the Northern Ireland Regional Food Programme.

Sit back, relax and soak it up!!

Is anything safe to eat??!! Cancer risk from tobacco chemical in your chips http://dailym.ai/1BMVUvV

The Dangers of Hidden Chemicals in Your Food

About time this message gets out there: Parents are ‘poisoning’ their children with fizzy drinks and sweets http://dailym.ai/1EKggWv

(Nb FB won’t allow me to follow back or send/receive messages!!!!)

the food love with all your contacts,friends and family.

Once again the BFM shares the food love!!! Ciao 4 now!!

The Belfasttravelman loves to travel. Be it for a nice scenic walk,to taking to the skies or by rail,sea and road.

Was treated to a divine Indian/Mexican Fusion meal of rice, chicken, salad and sauce as well as a packed burrito full of rice (flavoured coconut), chicken, lamb and sauce.

It was fab, a real tummy buster by David (of Belfast,Edinburgh and Mallorca fame) and our very own Naz of Nu Delhi fame.

Food and portion size amazing, but very much restaurant styled and not too street emphasis so come on lads do your thing.

Food and service and decour amazing. This place can reach the stars!!!!!

Like Loading...
April 8, 2015Leave a comment
The name Kurrito is a mix between the K from Saminas surname Kauser (owner) and Burrito, it really is a “curry” in a burrito!!
Also her Kudoori chicken is a play on words being an amalgamation of her surname and tandoori!! 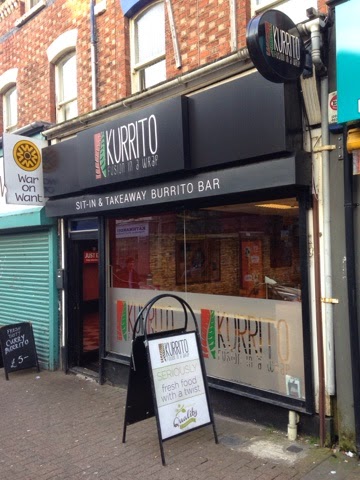 It is a very homely Pakistani/Mexican fusion oriented restaurant (with no liquor license), not dissimilar to another local restaurant I’m due to visit!! 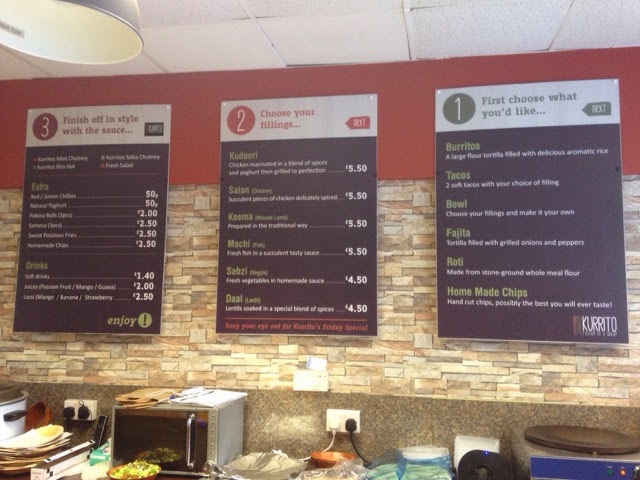 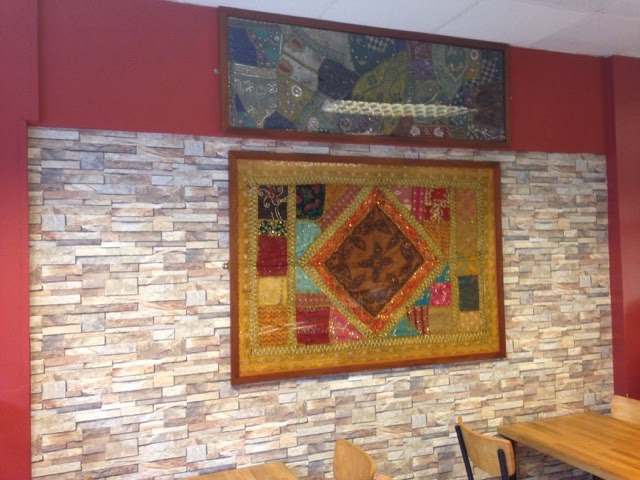 It was started in September and Samina stayed and really made a go of it. I must say she is a wonderful lady, very friendly, driven, passionate and successful. She also had a coffee shop which her brother now has Cafe Azizzi.
Samina comes from a big family in the East Midlands and learnt her cooking from her mother, who always said when you cook, cook with love and it comes through in the taste. Our food was full of love!!!! We had two mixed bowls @ £5.50/ bowl. Our bowls contained flavoured rice, Kudoori, Salan, Keema, Sabzi, butternut squash and peas with paneer, topped with fresh diced salad of pepper, tomatoes, cucumber and red onion. There are a range of chutneys to try, I had some mint and extra hot to give it a real kick. Needless to say they were devoured!! 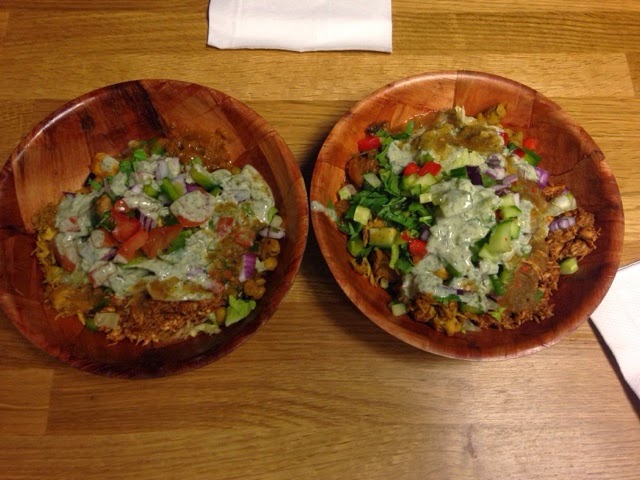 The meat is all Halal and lots of Asian people eat there-always a good sign.
Portion size was perfect and the food quality was just how home cooked food should be, not sweet,oily or pretentious. This definitely has to be tried out!! A really good addition to the Belfast ethnic food scene. 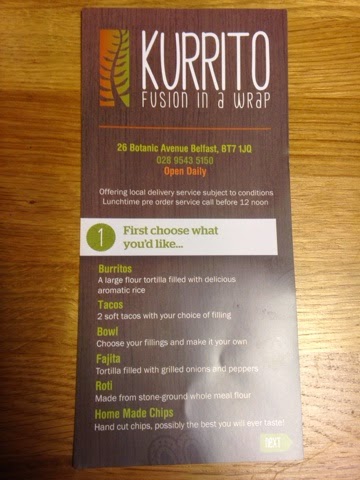 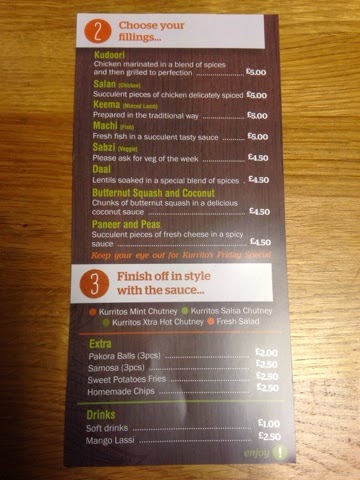 It’s Easter and wet and windy. So guys as well as loving food, The Belfasttravelman loves to travel. Be it for a nice scenic walk,to taking to the skies or by rail,sea and road.

the heavens opened,a sure blessing. When we all arrived at the venue
12350 Patullo Place
Surrey‎ Bc

The grooms side or Bharat were met by the girls side. Then the Jaimala occurred before the Hindu wedding ceremonies and party into the night!!

(Nb FB won’t allow me to follow back or send/receive messages!!!!)

the food love with all your contacts,friends and family.

Once again the BFM shares the food love!!! Ciao 4 now!!